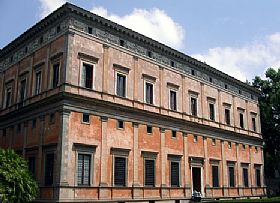 Villa Farnesina is one of the fullest examples of Renaissance architecture in Rome.

The rich banker from Siena, Agostino Chigi (called il Magnifico) took up the residence of his financial empire in Rome and commissioned the building of the villa from the fellow-citizen Baldassarre Peruzzi, in 1508. This might be considered a true architectural masterpiece of the artist, with a simple but harmonious design: the main body and two side fore parts, make it one of the first real Renaissance villas in Rome. The decoration works were made between 1510 and 1519, by Peruzzi along with great artists like Raphael, Sebastiano del Piombo and Sodoma, with marvellous frescoes featuring classical myths. Vault paintings on the main hall, Sala di Galatea, depicted by Peruzzi, represent Chigi's horoscope through mythological themes.

Contemporary artists, poets, cardinals, princes and the Pope himself were guests of the bountiful Sienese banker. Raphael frescoed the interior and designed the elegant stables where Chigi entertained the Medici Pope Leo X. The celebrated stable dinner party was an ostentatious display that ended with the Chigi ordering his servants to toss his solid gold dinner plates into the Tiber.

Often Chigi lived with the beautiful Imperia, lady of the court, portrayed by Raphael as one of the Three Graces: goddesses of charm, beauty, and creativity, painted into the Loggia di Cupido e Psiche. To the death of Chigi, his economic empire suddenly crumbled and, in 1577, cardinal Alessandro Farnese bought his estate and renamed it.

Haven't visited yet? Have questions about Villa Farnesina? Ask them here!