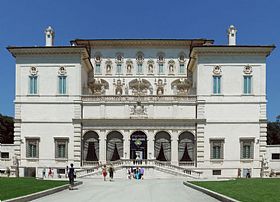 A sumptuous villa set in a sprawling park makes the Villa Borghese a unique oasis in the center of bustling Rome. The early Baroque palace was built by Scipione Borghese, a cardinal and passionate art collector who was part of Rome's noble family. The nephew of Pope Paul V, Scipione commissioned his uncle's personal architect, Flaminio Ponzio, to build the palatial residence which would be Roman country villa surrounded by lush gardens, right on the edge of the capital city.

It's classical style exudes touches of the Renaissance as well as Baroque but lighter and more elegant than had been previously seen in noble villas. Two wings extend into the garden and the ground floor rooms are built around a grand central salon with ceiling frescoes. Abundant tall windows overlook the lawns and grounds. The villa was started in 1612 and completed in just over a year. An aviary was added in 1617; the landscaping of the vast property took until 1620 to complete. Today, it's the largest park in Rome and a popular point for strolls and picnics. There are fountains, groves, and lanes lined with hedgerows. An artificial lake boasts a little island and a waterside temple. You can rent little row boats for a romantic sail or snag some bicycles to explore the entire 148 acres.

The Casina (little house), as it was called, was used for balls, retreats and entertaining, but mostly to showcase the artwork that the hedonistic Scipione, an avid collector, had accumulated. His collection brings together Rome's most important masterpieces in one place. The Galleria Borghese is a prestigious art museum with works by Raphael, Canova, Lorenzo Lotto, Rubens, Titian, da Cortona, Gentileschi and Pinturicchio. There are three paintings by the Baroque master Caravaggio and the four best sculptures of Gianlorenzo Bernini. More importantly, the works are mostly displayed in the places they were intended for, giving them the best visual effect.

The Bernini sculptures are incredibly detailed and were created to be seen "in the round", for the viewer to encircle the works to take in the full scope of the sculptures. David was commissioned when Bernini was only 25 years old and is a singular masterpiece of glory that captures the climatic moment of David ready to launch the deadly sling to slay Goliath. It is thought that a mirror was held up and Bernini carved his own likeness as the heroic, intense face. Apollo and Daphne freezes the instant of Daphne's transformation into a tree, translucent leaves carved from stone extending from her fingertips. The Rape of Proserpina is so realistic that marble melts into life-like flesh. These astonishing sculptures are worth the ticket price alone! Bernini also completed three busts and a portrait of his patron that adorn the villa.

There are also antiquities in the form of a 4th century BC Greek sculpture and a 3rd century BC mosaic of gladiators. The upper floor houses the Renaissance and Baroque paintings by the most prestigious artists of the time. There are twenty rooms of artistic splendor to explore.

Haven't visited yet? Have questions about Villa Borghese? Ask them here!