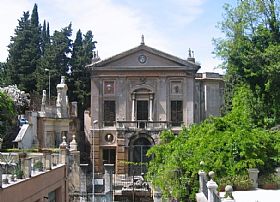 Villa Albani is one of the highest expressions of fine antiquarian taste that imposed itself in the middle of the eighteenth century.

The villa was built  by Carlo Marchionni to house the collection of ancient sculptures of Cardinal Alessandro Albani. The construction took place from 1746 to 1767, during the transition from the Rococo and Neoclassicism, in a period in which Rome had become the Mecca of the Grand Tour. The archaeological collection, moved to Paris by Napoleon, and only partially returned in 1815, consists of original Greek and Roman sculptures located in various buildings of the villa, which passed in 1817 to the Castelbarco family and was purchased in 1866 by Prince Alessandro Torlonia.

The complex included the villa, accessed via stairs and terraces, and on the other side, a semicircle with the Caffeehaus, an Italian garden, with fountains and several smaller buildings. Near the billiards area there was a small temple, which was used as an aviary. Inside the garden of the villa were placed pieces of the prestigious collection of antiquities of the cardinal. Not to be missed in the hall of the casino, the Gallery of Parnassus made by the neoclassical painter Anton Raphael Mengs, probably on the iconographic program of neoclassical theorist Johann Joachim Winckelmann, the librarian of the Cardinal.

In 1866, the complex was purchased by Alessandro Torlonia, and many statues were moved to the Museo Torlonia in Via della Lungara. It was also changed the layout of the antiquities in the villa. In 1870, the capitulation of Rome was signed at Villa Albani, that became a museum, while remaining property of Torlonia.

The museum houses the frescoes of the Tomb François di Vulci (IV century BC) and paintings which include works by Perugino, Tintoretto, Giulio Romano, Jacques-Louis David and others.

Haven't visited yet? Have questions about Villa Albani? Ask them here!