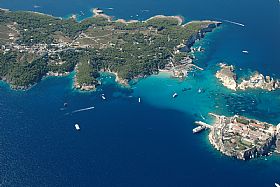 An archipelago of small isles off the coast of Puglia are Italy's only islands in the Adriatic Sea. The Tremiti Islands (pronuonced TREH-mee-tee) are off the Gargano peninsula and provide a getaway for nature lovers and diving enthusiasts. There are five islands, though three are more visited than the others. With coves and sea caves as well as coral reefs, these islands are popular with divers. There is a Roman shipwreck 24 meters underwater at Cala Zio Cesare that attracts scuba tours.

The biggest is San Domino, which has the majority of infrastructure with hotels, restaurants, stores and services. Most are open only in the warmer months. The island is ringed with alternating cliffs and beaches. The best swimming coves are reached by trails on foot or by boat, where you can swim and sun in relative solitude. A 5 kilometer trail circles the island, with tracts leading off down to the water. Ferries from the mainland arrive here, then you can take another ferry or water taxi to the other islands.

San Nicola is the second most visited, famous for its castle-like abbey that was built in 1045. It has a magnificent mosaic floor and a tall Byzantine crucifix called Il Cristo Grande. Perched on top of the cliffs, the monastery provides a dramatic sight when you're arriving at the island.

Caprara is uninhabited, populated only by birds and flora, and a protective lighthouse. Hire a water taxi to take you out for a day on a proverbial 'desert island'! Be sure to pack a picnic lunch though!

The Isole Tremiti are reached by ferry from Vieste on the Gargano, or the port of Termoli in Molise. For faster access, you can be whisked there by helicopter in 20 minutes from Foggia airport.

Haven't visited yet? Have questions about Tremiti Islands? Ask them here!

Rent a holiday home in Vieste and travel like a local.