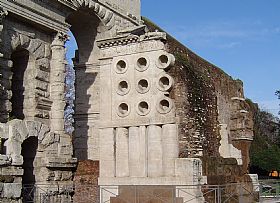 When Pope Gregory XVI ordered the demolition of the ancient defensive towers attached to the Porta Maggiore gate in Rome, he hardly expected to find a significant archeological site. He merely wanted to restore the ancient walls to their original state as built by Aurelius. But there, preserved within the cylindrical tower was a tomb dating back to the 1st century BC. Not a mausoleum of an important senator or influential military hero, but instead a monument of a former slave, built to house the remains of himself and his wife.

Eurysaces was a freedman who was able to buy his liberty and earn a living. He became a baker and made not only a decent wage but moved up in status throughout his life through his chosen profession. The monumental tomb is the largest and best preserved freedman's memorial in Rome. The travertine structure bears bas reliefs representing the bread production process, from mixing and kneading the dought to shaping the loaves and placing them in the oven, as well as serving the finished product to customers.

There are a series of cylindrical holes that are the exact size of one unit of grain. The urn containing his wife's ashes (now in the Museo delle Terme) is shaped like a bread trough. Eurysaces was obviously very proud of his profession and his accomplishments.

Perhaps the monument was of such grandeur as a message. Since he was a former slave, he had no family history to draw on and pass on to his future generations. But his monumental grave was a way to make a mark and send a message to other freedmen who were struggling to get ahead. A success story told through a tomb!

Haven't visited yet? Have questions about Tomb of Eurisace? Ask them here!