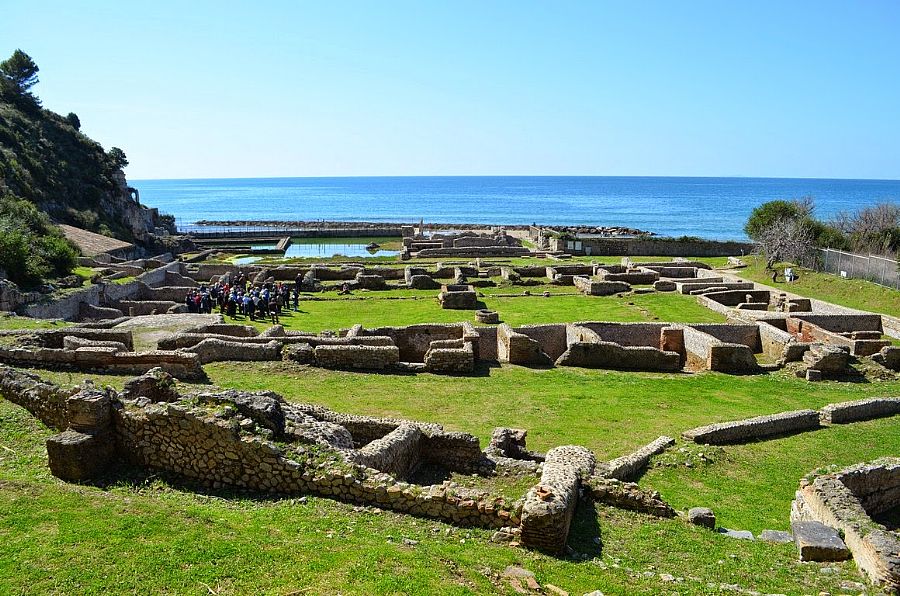 Just outside Sperlonga is an interesting archeological site, the Villa and Grotto of Tiberius.The Roman villa belonged to Emperor Tiberius in the first century, constructed on terraced levels facing the sea. The emperor loved the seaside location and the grotto, along what is now called the Coast of Ulysses, though even then it was well-regarded as the location of the Homeric epic that included the temptress Circe (nearby is the town of Circeo). A text from 26 AD documented that Tiberius was saved from falling rocks during a banquet in the grotto, by his friend and confidante Seiano.

There was a courtyard with porticoes in the sprawling structure, a regal getaway spot. The complex included a summer extravagance - an "island" dining room set in a grotto along with a circular swimming pool in the cave. The grotto included water sprays and fountains and niches for statues.

There were references to Tiberius's villa in ancient texts but it was only definitively uncovered when road work on the Via Flacca brought it all to light.

The site included a thermal bath area, a small boat harbour, and pools for raising fish.

All the sculptures and artifacts from the site are displayed in the adjacent archeology museum, so be sure to take time to visit that, too.

The Villa and Grotto are located at the end of the town's beach, reachable by car along Via Flacca.

Haven't visited yet? Have questions about Tiberius' Villa and Grotto? Ask them here!