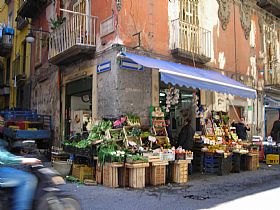 Bustling, colorful, crumbling, energetic, gritty and crowded - that is the Quartieri Spagnoli in Naples. The tight grid of streets looks like graph paper on the map; it is the most densely populated part of the city.

The street network was laid out in the 1600s when the Spanish ruled the Kingdom of Naples. It was the district where the troops were quartered. Via Toledo, one of Naples' main thoroughfares, borders the district to the east, named for a Spanish viceroy of Toledo, Spain. It then became common housing, and today is still a jam-packed quarter of humanity and life where horns blare, people shout, motorini buzz, music tumbles out of windows, and laundry flutters in the breeze like celebratory banners. It is, in short, the stereotype of Naples that is seen in movies.

The streets are so narrow that sunlight doesn't always penetrate to the pavement level. Most of the alleyways measure only 3 meters (just under 10 feet) wide! All along them are apartments, workshops, craftsmen, shops, trattorias, cafes. There are shopping streets that feel like a bazaar in Morocco - just stroll Via Pignasecca or Emmanuele de Deo for a glimpse of the excitement. The alleys almost all end at staircases that climb the Vomero hill; it seems every street has a secret passageway.

It is probably the most characteristic and chaotic part of Naples, one worth seeing. (But a word of caution: keep an eye on your purse and belongings, and we don't recommend wandering around there at night if you're not familiar with the surroundings.)

Haven't visited yet? Have questions about The Spanish Quarter? Ask them here!