The Canals of Bologna 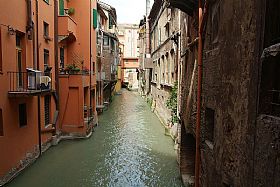 A little known fact about Bologna is the city's canals. In fact, there are about 60 kilometers of them, it's just that today a lot of them are unnoticeable because they've obscured - buildings were constructed over them! Once important for the silk industry, the waterways powered the wheels that spun the silk and power other cottage industries. There was once even a river port in the city with warehouses lining the bank. A complicated system of locks, canals and pipes produced energy and brought water to the city's fountains.

Underground are remains of Roman aqueducts, mill runs and cisterns. Street names like Via del Porto and Via delle Moline (mills) testify of this history. There are tours that specialize in visiting these hidden sights.

The city's tourism agency has a good resource available to find the locations visible from the street. Check it out and see this little-known but interesting feature of Bologna!

The Water Ways of Bologna

Haven't visited yet? Have questions about The Canals of Bologna? Ask them here!