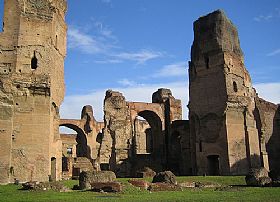 The Terme di Caracalla were built between 212 and 217 BC by Caracalla, son of emperor Settimo Severo and himself emperor after his father. This Roman thermal baths complex – capable to host up to 1600 people - is one of the greatest examples of the ancient Roma that still today can be visited: its ruins are located nearby the Aventino hill.

The structure of the baths was huge like the typical Roman baths with a big central building surrounded by gardens and pools.

Inside the baths the layout of the rooms was quite symmetric: in the middle the Basilica, covered by three groin vault, the Frigidarium, the Tepidarium and the Calidarium, and on the side gyms, changing rooms and vestibules. The Frigidarium, not heated on contrary of the Calidarium and the Tepidarium, was generally wide and well decorated and used to be the final stage of the bath route, starting with the gym and the Turkish bath.

In order to warm up water, several fireplace were located in the lower floor, spreading warm air in all the floor cavity called Ipocausti, that were sustained by some pillars. All the internal rooms were decorated by elegant mosaic and precious marbles, often coming from North Africa and the Middle East.

It was in this great complex that we can admire some of the best witness of the famous Roman architecture: marvellous vaults, accurate arcs and princely rooms all mixed in an unique environment.

The Terme di Caracalla were more than once restored and operated till 537 AC when the Ostrogoth king Vitige cut the aqueduct.

Some of the main pieces of art that you can still visit are the "Toro e l’Ercole Farnese" and some spectacular mosaic representing Roman athletes, nowadays hedge in the Musei Vaticani.

The baths used to be one of the Roman favourite amusement: this was the place were to meet up with people, were to relax in some enormous rooms characterized by finest decoration.

Haven't visited yet? Have questions about Terme di Caracalla? Ask them here!