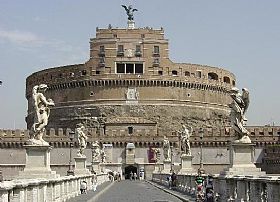 The Ponte Sant'Angelo is the most famous bridge in Rome. Built of travertine stone in 134 AD over the Tiber River to provide access to the enormous circular tomb of Elio Adriano (better known as the Emperor Hadrian), so it was originally named Ponte Elio. According to legend the bridge and the mausoleum were both renamed Sant'Angelo after Pope Gregory I saw an angel appear on the roof of the imposing castle to announce the end of the plague.

The bridge saw an ugly period of history when it was used to display the bodies of executed criminals. Later, it was commonly used to reach the Vatican and St. Peter's basilica and a toll was charge to cross the span. Sculptures of the apostles were commissioned to adorn it. In 1669 Pope Clement IX turned to Rome's premier sculptor to provide replacement statues and Gian Lorenzo Bernini created the ten angels that decorate Ponte Sant'Angelo.

Today, the bridge provides pedestrian access across the Tiber from the Vatican and Castel Sant'Angelo to the historic center of Rome. It offers lovely views of the most famous monuments and church domes in the city.

Haven't visited yet? Have questions about St Angelo Bridge? Ask them here!