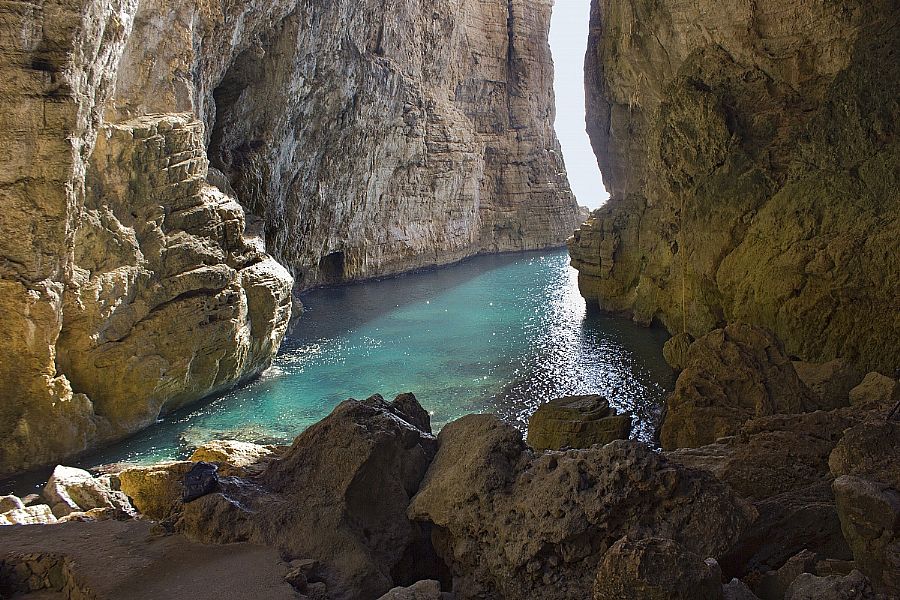 The Sanctuary of the Most Holy Trinity is better known as the Split Mountain, because of its three clefts in the rock that plunges to the sea. The sanctuary was build in the 11th century, and it was in this holy place that St. Philip Neri enjoyed coming for quiet reflection, hiding himself away in a corner of the rock. There is a chapel dedicated to him. St. Bernard of Siena also visited the place, and word spread so pilgrims came from as far away as Spain; in fact, Cervantes mentioned it in Don Quixote.

A staircase of 33 steps take you to the upper mouth of the gorge. This, along with two other clefts in the rock of Monte Orlando are said to have cracked open during the earthquake that shook the earth at the moment of Christ's death on the cross.

Along the walls, the stations of the cross are incised into the rock; it is believed that St. Bernard was responsible for the work. At the end of the Via Crucis is a handprint carved in the rock.

You can pay a fee and climb down the staircase of the Grotta del Turco, where the sea rushes into the crag. The sun casts brilliant turquoise hues onto the water and it's a beautiful spot, but BEWARE: there are 300 steps to descend (and then to climb back UP!)

Haven't visited yet? Have questions about Split Mountain Montagna Spaccata? Ask them here!

Rent a holiday home in Gaeta and travel like a local.