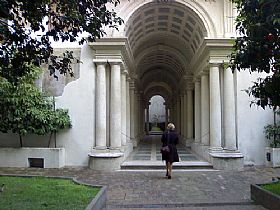 In the tight streets of Rome's old medieval quarter looms the Baroque-embellished Palazzo Spada. Originally built by Cardinal Girolamo Capodiferro, whose name is given to the street on which the palazzo sits, it was purchased by Cardinal Fernardino Spada in 1632, who undertook extensive renovations. He hired the noted Baroque architect, Francesco Borromini, who added a flurry of facade decoration in stucco to the front, a sarcophagus-looking fountain out front, and an architectural triumph that put his name into the trade's history books. Borromini's use of forced perspective took a short corridor leading to the interior courtyard and, with the clever mathematical use of column spacing and back-lighting, made it appear five times longer and grander than it is in reality.

The colonnade, courtyard, and palazzo's gardens, which stretch back to via Giulia near the Tiber, were the scene of many galas and balls. But the Spada's didn't stop with architectural attractions on their residence; they were grat collectors. Starting with the good cardinal, then his brother Virgilio and grandnephew Fabrizio, the noble clan amassed a noteworthy collection of masterpieces, which are on display in four grand salons. The Galleria Spada displays works by Baroque greats such as Andrea del Sarto, Guido Reni, Titian, Caravaggio, Carracci, Parmigianino, and Gentileschi.

The Palazzo Spada is also the seat of the Italian Council of State, the administrative body of government. Its meetings are held in the frescoed salons.

The gallery is open from 8:30 am to 7:30 pm. Closed Mondays. Tickets can be reserved and purchased in advance through the official website. While visiting the Spada, look for the medieval house in the same street, to the left of the palazzo, with ancient columns embedded in the rough stone wall.

Haven't visited yet? Have questions about Spada Gallery? Ask them here!