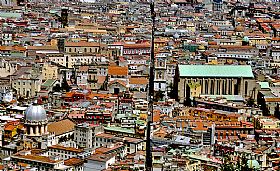 One of Naples' most characteristics districts is the Spaccanapoli Quarter. It is so-named because the main street, Via San Biagio, slices the city in two; literally "spacca" (split) Napoli. This is where you'll find some of the city's most famous churches, and the insanely-narrow streets that teem with life. Peeling palazzi decked with balconies, artisan workshops, tiny shops that pile their wares on the street like a Marrakech market, buzzing scooters, and laundry flapping like banners that criss-cross the slender lanes - this is the quintessential Naples that you've seen in films. Vibrant, chaotic, musical and noisy, and full of the life of the densely populated city.

Along Via San Biagio (which is called Via Benedetto Croce in one stretch) to where it intersects with Via Duomo you'll find boutiques, tiny stores, vegetable stands, bars, and the life-spectacle that is found only in Naples. The churches in the area aren't to be missed: The Church of Gesu Nuovo with its diamond-point facade; the church of Santa Chiara with its famous cloister that is decorated with tile-covered columns and vine-drapped trellises; the Cappella Sansevero with its paintings, portraits and the inspiring sculpture of the Veiled Christ; the Cathedral of San Gennaro. Also in this quarter is the famous Christmas Alley, where the delicately detailed nativity figures are made.

The Spaccanapoli District is the original ancient heart of the city, first the Greek city of Neapolis and then the Roman city. It is one part of Naples that you must visit to observe this splendidly chaotic city in its daily-life glory.

Haven't visited yet? Have questions about Spaccanapoli? Ask them here!

Have you seen our self-catering apartments in Naples?