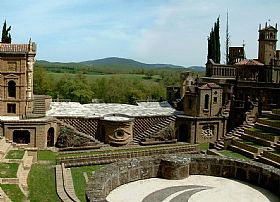 The Scarzuola is the surreal work of art designed by Tomaso Buzzi. Buzzi was an architect, artist and one of the best know Italian literate men of the twentieth century. The Scarzuola rises in the town of Montegiove, near Montegabbione (Terni). It is said that in 1218, St Francis of Assisi lived there, and built a hut made of "scarsa" (a kind of aquatic plant, hence the name Scarzuola). The saint founded a monastery planting a laurel and a rose, creating a source to which people are still very devout. The small church of the monastery houses a fresco dating from the first half of the thirteenth century, an early portrait of the saint in levitation.

The Scarzuola today is a place of magic, transformed by the Milanese architect Tommaso Buzzi, who bought the monastery in 1957 to build his "ideal city". The restoration of the convent was the first step of the Buzzi project, after that he started to recovery the gardens. He changed the innocent gardens of the monks in a fantastic green carpet where among box hedges, rare flowers, statues and pergolas, it evokes the myth of love between Poliphilo and his nymph. Once completed the recovery of the "holy city", Buzzi started to build his "profane city" called "Buzziana", drawing a symbolic and neo-Illuminist journey which referred to his esoteric knowledge and insights. The "ideal city" is located at the end of the garden, overlooking a vast natural amphitheater. It looks like a bizarre town made of tuff, it seems to have been modeled with the sand, like sand castles by the sea. The buildings are connected by real theater areas (stages, steps, large tanks) built on land elevations and supported by massive walls of stone.

The Buzziana is really a secular city, as it is overloaded with references and citations: everywhere there are impressed mottoes, monograms and indecipherable symbols. Conceived according to a personal neo-Mannerism, the citadel has baffling and complex forms: there abound stairs and ladders, bas-reliefs of monsters, statues, sort of " Arcimboldi’s" phytomorphic representations with no reference to architecture. There is a jumble of buildings and monuments that looks truly miraculous: circular structures like Arabic astronomical observatories, zoomorphic constructions, thebaids and meditation wells, theatrical areas, temples of pagan religions with the crystal tower, which actually looks like the pinnacle of a Gothic cathedral. At his death in 1980, Tomaso Buzzi left his work unfinished, and expressed the wish that nature should have taken possession, devouring the ideal city, making it a beautiful set of ruins worthy of the brush of Clerisseau. However the Buzziana did not disappear and now almost entirely completed, shows itself to the man of the third millennium like a spiritual labyrinth, a concept that forces the rules of our dimension to impose another one.

Haven't visited yet? Have questions about Scarzuola, the Ideal City? Ask them here!