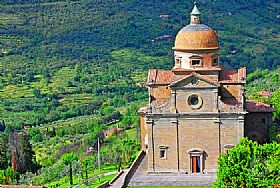 Set on the hillside below Cortona, the church of Santa Maria Nuova is an enchanting sight. Its dome rises from the trees and when there is mist or fog swirling, it's magical.

Construction was begun in 1550 based on designs by Cristofanello but his death brought a shift. Giorgio Vasari was commissioned and the design changed to a classic Renaissance style temple based on Greek cross plan. Vasari departed for Florence to work on the Palazzo Vecchio so other masters were brought in to oversee the project, though he returned occasionally to tweak and check on it. The barrel vaults and cross-vaulted side aisles separated from the main nave by columns are attributed to his original plans as is the dome and lantern crowning the structure. The church was dedicated in 1610.

The lovely location was no accident. There had been miraculous apparitions of the Madonna on this spot, along the road that leads to the Benedictine monastery called Eremo Le Celle, and so it was decided that a proper shrine be built in her honor.

A trip to Cortona isn't complete without a look at this attractive building in a lovely setting.

Haven't visited yet? Have questions about Santa Maria Nuova Cortona? Ask them here!

Have a look at our apartment rentals in Cortona.