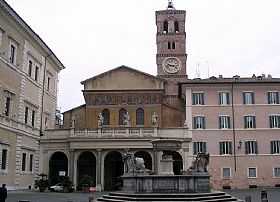 This marvellous church probably was the first Christian place of worship in Rome, founded by Pope Callistus I in the third century, when Christians were a minority and Roman emperors still heathen.

According to the legend, the church was built in site of an 'oil jet' miraculously gushing from the ground to announce Jesus Christ birthday. The titular minor basilica, which now faces the real heart and main piazza in Trastevere, has kept the traditional structure with a nave and two side aisles. Although the current building and mosaics date back to the XII and XIII centuries, the preceding Virgin pictures are still predominant. The stunning façade mosaic, probably dated back to the XII century, is believed to be the earliest iconographic depiction of the Virgin nursing Jesus, and ten women carrying as many lamps.

The beautiful apse mosaic inside the church (XII century) depicts The Coronation of the Virgin Mary; just beneath are six mosaics representing scenes from the Life of the Virgin (1290), by Cavallini. Through the wooden door on the left, just before entering the transept, there are two tiny, lovely fragments of I-century AD mosaics from Palestrina, and in the Altemps chapel to the left of the high altar is a very rare VII-century painting on wood of the Virgin, known as the Madonna of Clemency. Still on the left side is the XVII-century Avila chapel with its elaborate cupola by Antonio Gherardi. The wood-carved ceiling and centrepiece painting of the Assumption is by Domenichino. Throughout the nave, fine marble mosaic in the cosmatesque style graces the floor, but the original XII-century work was almost completely replaced in the late XVIII century.

Haven't visited yet? Have questions about Santa Maria in Trastevere? Ask them here!