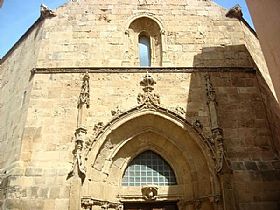 Alghero's cathedral with its tall bell tower is the symbol of the city. The first phase of construction was in late Gothic style, begun in the early 1500s, but the church wasn't really completed until the early 1600s. Artwork was added through the years, adorning the church with a mix of styles and artistic periods rather than a harmonious effect. The towering bell tower was part of the first phase of construction, behind the cathedral, an octagonal late Gothic decoration with a pointed steeple.

The church has an unfortunate neoclassic temple-style facade on its piazza entrance, but walk around the structure to admire the original octagonal splendor of the old stone church. There are plenty of stone decorative carvings.

Inside are three naves set off by towering columns with vaulted ceilings, fine carvings and impressive marble inlay. The focus is on the structure and its stone work rather than fancy artwork.

Haven't visited yet? Have questions about Santa Maria Immacolata Cathedral? Ask them here!

Enjoy the comfort of a vacation home in Sardinia.