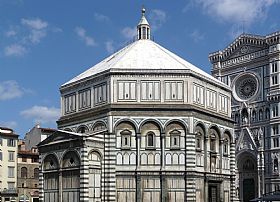 One of Florence's oldest monuments is the charming octagonal Baptistery of St John. Located in the heart of the city in the Piazza del Duomo, it is adjacent to the Cathedral of Santa Maria del Fiore, Florence's most famous landmark with its distinctive pastel-hued marble, tall bell tower and enormous dome designed by Brunelleschi. The baptistery sits in front like a welcoming beacon to the monumental piazza and church.

The structure was consecrated in 1128. It was built on the site of an ancient pagan temple; the interior maintains the exterior's octagon footprint. Vibrant mosaics depicting the Last Judgement soar above the baptismal font where countless Florentines - including Dante - have been baptized through the centuries. The floor is intricately inlaid in geometric mosaics. A marble plate was originally placed in the floor as an astronomical marker that tracked the sun's movements but it was moved to the east side of the building in the 13th century and is not longer an active device.

The most famous feature of the Baptistery is on the exterior, however. The decorative doors were designed by famous artists and draw millions of visitors to gaze upon their amazing artistry. The south doors were completed by Andrea Pisano and depict the life of St. John. The north doors were designed by Lorenzo Ghiberti and took 21 years to complete, visually telling the story of the New Testament. The beauty of this entryway garnered Ghiberti the commission of the east doors, which were to become his most famous masterpiece. The bronze relief panels recreate Biblical scenes and consumed 27 years of the artist's life. His efforts were well rewarded, as Michelangelo dubbed them the "Gates of Paradise" and they were mentioned by Galileo in his final book (1638). They are still a highlight for any visit to Florence.

The doors currently mounted on the Baptistery are accurate recreations; the originals are safely housed in the splendid Museo dell'Opera del Duomo, behind the Cathedral.

Haven't visited yet? Have questions about Baptistery of St John? Ask them here!

Have you seen our self-catering apartments in Florence?