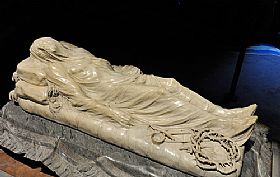 A Baroque chapel in the heart of Naples is a treasure-trove of sculptures. The Sansevero Chapel has a legendary story about its origins, recorded in a book by Eugenio Caracciolo called Sacred Naples, that was published in 1623. He recounts the story of an innocent being led to prison in chains for crimes he didn't commit. Along the way, while passing the garden of Palazzo di Sangro he saw a portion of the garden wall collapse and a vision of the Virgin Mary appeared. He asked her help in proving his innocence, and in exchange he would offer his silver lamp and devotion. He was released and he upheld his vow; the image on the wall, illuminated by his silver lamp, became a pilgrimage site. Among the visitors was a local duke, Giovan Francesco di Sangro, who was healed after his prayers before the image, and in thanksgiving he built a chapel around it.

The sacred image is still in place above the altar, but the chapel that was constructed is now a Baroque monument. The di Sangro family amplified it and it became their chapel and family crypt. They decorated it with a wealth of sculptures, which puts the chapel on the must-see list of artistic treasures in Naples. The most famous sculpture is the astounding Veiled Christ, by Giuseppe Sanmartino. It is an intricately carved piece that leaves viewers amazed at the skill...how did he make the features appear so vividly below a veil of stone? It is a true masterpiece.

No less awe-inspiring is the statue of the Veiled Modesty, which is part of the Virtues series. This piece, by Antonio Corradini, a Venetian artist who also was skilled in carving 'veils' out of stone, a delicate marble covering with the perfectly sculpted features below. Other virtues are featured by various artists around the chapel. There are other monuments and sarcophogi with noteworthy carvings, as well. An interesting oddity is Raimondo di Sangro's anatomical skeleton with the entire blood vasulature in vision. Other inventions and visions of Raimondo's are on display in the museum.

The Sansevero Chapel should definitely be on your list of sights to see in Napels!

Haven't visited yet? Have questions about Sansevero Chapel? Ask them here!