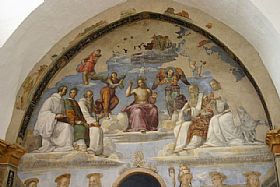 At Perugia's high point is a highlight piece of artwork in the Cappella San Severo. The plain brick facade of the chapel hides a beautiful fresco by Raphael, painted between 1505-1508. The painting depicts the Holy Trinity with saints and angels; while the depiction of God the Father is deteriorated, the Alpha and Omega characters that symbolize him are still visible. The lower part of the fresco was completed by Perugino when Raphael was called to Rome by Pope Julius II to undertake work in the Vatican.

The chapel is adjacent to the church of San Severo and was constructed in the 1400s. The next-door church was built in the 1100s over the remains of a pagan temple dedicated to the sun, from which the district of Perugia gets its name (Rione del Sole).

Haven't visited yet? Have questions about San Severo Chapel? Ask them here!

Have a look at our holiday homes in Perugia.