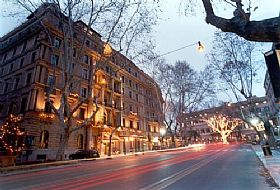 This curving boulevard is probably the most famous street in Rome. The tree-lined avenue was popularized in the '50s and '60s after it appeared as the hip scene in Fellini's film, La Dolce Vita. Via Veneto, and its accompanying cafes and restaurants, came to define the "the good life" - Roman style, and attracted the glitterati along with the paparazzi who followed them. Photos in tabloids and magazines furthered the reputation of Via Veneto as the "in" place to be.

The street starts in Piazza Barberini and the first post-Renaissance palaces were built after the influential Barberini established their family seat in the palazzo and piazza that bear their name. Most of the refined-looking palaces on Via Veneto were built in the late 1800s, though. Many are now luxury hotels. Palazzo Margherita, at the half-way point as the street meanders to Porta Pinciana, was the pastel palatial residence of Queen Margherita, the savoy widow of King Umberto. It's now home to the US Embassy.

But the main draw is still the feel of elegance you get when you to the Via Veneto for an evening out. There are "fish bowl" like cafes on the boulevard for pre-dinner drinks, where you can watch the people parade by. And there are loads of classy restaurants, complete with candlelight and musical serenades. With high-end shops scattered about, too, you can see why it's still popular with the stars as well as the upscale crowd.

But there are places for every budget, and the palaces alone are worth a stroll up the street. You'll also see places featured in films and feel like a star yourself for a little while.

Haven't visited yet? Have questions about Rome's Via Veneto? Ask them here!