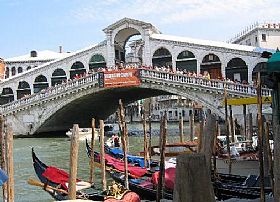 Stone bridges were built in Venice from the beginning of the XII century, but only in 1588, after a period of decline and sabotage of wooden structures, it was finally designed a stone bridge in Rialto. One of the first wooden bridges crashed down in 1444, under the eyes of incredulous spectators, while the marquis of Ferrara celebrated his wedding.

Vittore Carpaccio’s The Healing of The Possessed Man (1496) represents the fourth Rialto bridge, which was mobile to facilitate the galleys’ passes. In the XVI century it was very bad conditions, so that there was an open competition to project the new bridge. Artists like Michelangelo, Andrea Palladio and Jacopo Sansovino appeared into the list, but the competition was finally won by Antonio da Ponte. The current bridge was built between 1588 and 1591 and, until 1854 (when the Accademia bridge was finished), it represented the only way to walk across Canal Grande.

Haven't visited yet? Have questions about Rialto Bridge? Ask them here!

Rent a holiday house in Venice and Veneto and travel like a local.