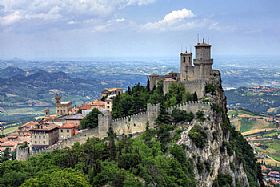 A UNESCO World Heritage Site for good reason, the Republic of San Marino clings to its peaks and its sovereignty and is a unique place to visit. Ensconced within the borders of Italy, it touches Le Marche and Emilia Romagna regions. The tiny city-state is the world's oldest republic. It was recognized by UNESCO for its civic autonomy and continuity of democracy.

Tradition dates the founding to 301 AD when St. Marinus arrived on Mt. Titano seeking refuge from persecution with fellow countrymen from Dalmatia. A small community grew and the sympathetic landowner bequeathed the territory to them. It became known as the Free City of San Marino, with written testimony of the republic's history going back to at least the 900s, with its written statutes dating to the late 1200s. It has maintained a reputation of peace and refuge, offering asylum through the centuries to those fleeing political and religious persecution. Even Napoleon left San Marino independent and untouched.

The first sight is breathtaking with its dramatic landscape and storybook castles jutting from the pinnacles. The main city of San Marino is encircled by protective walls, and the fortresses are the symbol of the city as they have stood in guard over the republic for centuries. San Marino has its own license plates, stamps and coins (though the Euro is used as currency). While many balk that it is "touristy" and filled with kitschy shops (unfortunately), it still retains a regal air and a proud sense of its unusual history.

Don't miss the changing of the guard in front of Palazzo Pubblico (hourly on the half-hour), with the militia in their dress uniforms. Piazza della Liberta' is an impressive spot, with the neo-gothic civic palace and the sweeping views over the hills on one side. The church of San Francesco and accompanying art gallery are worthy stops, and it's a must to pay homage to the founder at the Basilica of San Marino, a classic temple-style building which holds the remains of the saint. The Museo di Stato displays art and artifacts of the republic's history. Hike to the castles but also the trails around the small city-state (which measures 24 square miles); there are spectacular views to behold! Then go down to the plain below to the Ferrari Museum for a modern Italian contrast.

Within San Marino is a collection of small villages; while the main city in the walls is the most visited, the pretty Borgo Maggiore is worth a stop, as well. It retains its medieval character, and the porticoes still host the weekly mercato just as it has for centuries. Taste the area's traditional wines at the San Marino Winery (Consorzio Vini di San Marino). San Marino has a history of wine-making that goes back to the 13th centuries, and here you can sample vintages like Aleatico, Biancale, Ribolla, and Sangiovese.

Haven't visited yet? Have questions about Republic of San Marino? Ask them here!

Ask our staff about self-catering homes in Marche.