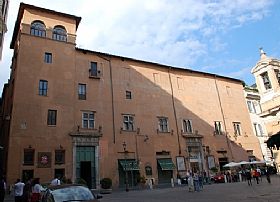 A pretty pedestrian piazza in the heart of Rome is named for Cardinal Domenico Capranica. In 1450 he constructed a building to house the College for the education of ecclesiastics, the first seminary opened in Rome. When he died two years later, his brother took on the college and enlarged the plans to include a palatial family residence here as well. Under the tower is the is the inscription "Collegium Capranica" while on the right in marble is the original entrance to the building. A theater was added to the piazza by Pompeo Capranica about a century later, with its first performance debuting in 1679.

The theater underwent several restorations but for security reasons was ordered closed in 1881. The premises was used as a warehouse for 40 years, then renovated and reopened in 1922 as a cinema, which is still functional today.

Palazzo Capranica is one of the few "pre-window" buildings of the original Renaissance palace that has survived over the time. The spare facade is the result of a series of later additions, which was not unusual in the late fifteenth century, when Rome was in the transition between the Middle Ages and the Renaissance.

On the capitals of the columns there are still traces of the chiseled Capranica coat of arms. The upper floors are marked by evident signs of walled-up windows, while the tower is now half of what it had been.

The beautiful baroque church in the Piazza Capranica was designed by Carlo Moderno and sits right behind the Piazza Montecitorio, seat of the House of Deputies (hence the security you see around).

The piazza was the scene of the mercato dei barilari, barrel makers, and wine making supplies. Perhaps to pay homage to that era there is a nice enoteca here today, a wine bar called Enoteca Capranica (of course!)

Haven't visited yet? Have questions about Piazza Capranica? Ask them here!