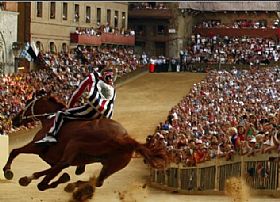 Undoubtedly Italy's most famous event, the Palio of Siena is a high-energy horse race rooted in the Middle Ages. Accompanied by much anticipation, ceremony and emotions, the annual event takes place on July 2 and August 16, to much fanfare and a surge of tourists in the Tuscan city.

The exact origins of the event are lost in the mist of time but it known to have been celebrated since before 1310, when it was held as a solemn ceremony on August 16 in honor of the Madonna Assunta (ascension into heaven) in thanks for protection over the city. After the Battle of Montaperti in 1260 and Siena's victory over Florence, it acquired more political and symbolic significance, and the heads of the contrade would donate long, thick candles to the church, which would provide illumination for the year. Other ceremonies and parades were gradually added. In the 1650s, the July race was started following the apparition of the Virgin Mary to Provenzano Salvini, where there is now the Church of Provenzano.

The city is divided into 17 contradas, each with its own colors and emblems. Painted plaques adorn many buildings of the historic center of Siena to designate which contrada you're in. People are very proud of their neighborhood of birth and remain devoted it to throughout their lives, even if they move to a different area. They participate in events and charitable involvement throughout the year. So when the Palio rolls around, it's a culmination of a year of organizing and anticipation, and all the contrada residents get involved.

There are rituals involved in re-enacting the medieval tradition. Jockeys are hired guns, often "butteri," the cowboys that tend the Tuscan breed of horses in the Maremma district. They are both revered and reviled, depending on their performance, and represent the epoch when Siena could pay horsemen and knights to engage in battle on their behalf. Jockeys train and prepare all year for the dangerous race.

The Piazza del Campo is the epicenter; in the days preceding the race it is covered with earth, then six trials are run to prepare both horses and riders for the conditions of the track. Other prescribed parts of the ceremonies include the drawing of lots to determine rider order, a Mass for the jockeys, and the blessing of the horses. The race is preceded by a pageantry parade of hundreds of participants in glorious period costumes. Each contrada marches through the street accompanied by their trumpeters and drummers, along with a host of representatives all decked out in authentically-reproduced Medieval garb. Flag-throwers perform with their intricate banner waving, a high-flying ballet of colored flags that are skillfully launched and displayed. The parade lasts for about two hours, and is followed by the "carroccio," an ox-drawn carriage that carries the Palio, the intricately painted banner for which the race is run. This prize is hand-made each year by a Sienese artist, and will be displayed proudly by the winning contrada until the next year's event. Following the Palio carriage is the black and white flag of the city of Siena.

The race is the climax, with the horses maneuvering three laps around the tight curve of the packed piazza. Spectators arrive early in the morning, filling the center inside the track, which is then closed off. The perimeter of the piazza swells with the teeming crowd. Seats range from simple bleachers to elaborate box seats, with tickets selling out well in advance. Those with an vacation apartment overlooking the piazza are lucky to see the show for free from the window or terrace! (Be aware that with the vast, tight crowd, it's not recommended that you take children into the piazza for the Palio.)

The race begins, and the saddle-less jockeys can get un-horsed quite easily in the frenetic fray of the race. The crowd pushes and yells in this highly emotional and hotly contested race. It's a slice of centuries of competition culminating in three laps of a horse race!

Afterwards, the losers go back to their contrada centers to console themselves and plot next year's win, while the winners go to the Church of Provenza (in July) or the Duomo (in August) to offer prayers of thanksgiving, before heading home to the contrada for an all-night celebratory party. In September, the winning contrada partakes in a marvelous Victory Dinner, where the jockey takes the head of the table, and sometimes the horse itself gets to take a place of honor, too.

Haven't visited yet? Have questions about Palio di Siena? Ask them here!