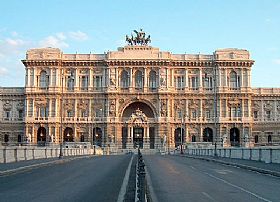 Palazzo di Giustizia fronts the Tiber River and is one of the major modern architectural works in Rome. Designed and built by Guglielmo Calderini between 1889 and 1911, it is the seat of the Supreme Court. . The enormous building (170 x 155 meters) was entirely constructed in travertine, borrowing 16th century and Baroque motifs. The elaborately decorated facade has three orders of windows with balconies and loggias, and a portal framed by a triumphal arch.

The imposing palace was built as a symbol of statehood after Rome was declared the capital of the newly unified nation. It was inaugurated by King Vittorio Emanuele III in 1911. The crest of the House of Savoy is emblazoned on the wall facing Piazza Cavour. The massive bronze statue is a "quadriga," with four horses pulling a chariot, depicting the bringing of justice.

The Palazzo di Giustizia houses the Supreme Court, along with the Law Library and the Council of the Order of Roman Lawyers. It can only be appreciated from the exterior, as the building is closed to the general public.

Haven't visited yet? Have questions about Palazzo di Giustizia (the Hall of Justice)? Ask them here!