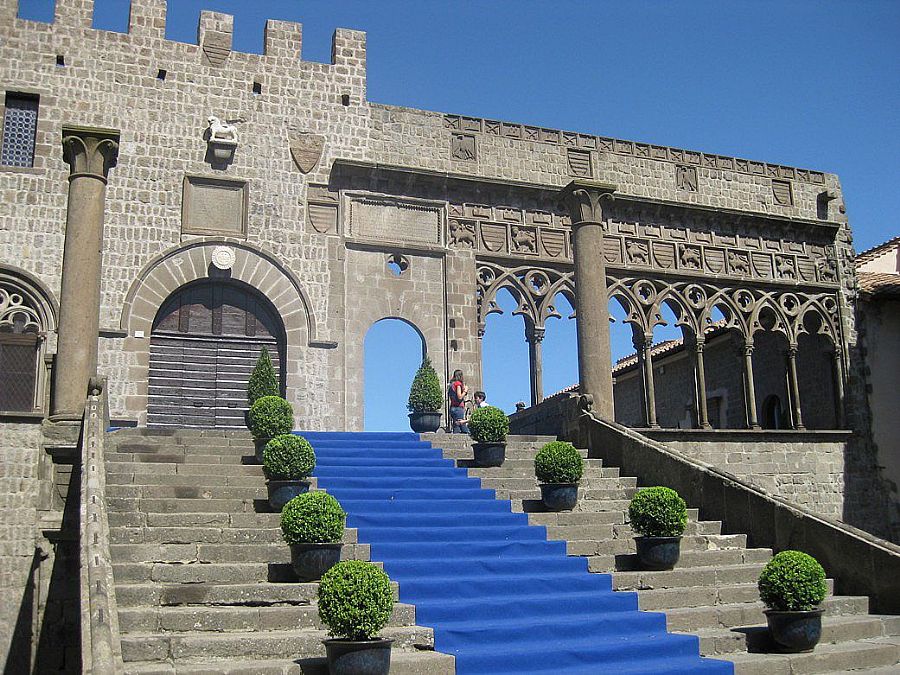 Viterbo was home to the papacy for a brief period, before it moved off to Avignon. It was here that the famous conclaves were begun to elect a new pope, with the College of Cardinals being shuttered away in seclusion until a decision is reached.

The Palazzo dei Papi, or Papal Palace, was already standing as the bishop's palace when Pope Alexander IV decided to bring the Pontifical Curia to town in 1257, moving the papal court to Viterbo to avoid civil unrest in Rome. The palace was modified and amplified to make it more fitting, with additions and renovations.

Pope Clement liked the tranquility of the Papal Palace there and maintained the papacy in Viterbo. When he died in November, 1268, an oddity of church history ensued with the longest papal conclave ever, lasting nearly three years. The tradition of closed conclaves was already established, so the College of Cardinals was locked in the Palazzo dei Papi to choose a successor. Not able to reach agreement, the proceedings dragged on. And on. And on. The city finally stopped sending in food and water in an effort to drive them to a decision. When even that didn't bring results, townspeople climbed on the roof and started dismantling it. Finally, in September, 1271, they elected Pope Gregory X (who then enacted changes to the election process). By the way, the word "conclave" comes from the Latin "cum clave" meaning "with a key".

The Aula del Conclave was built to host papal audiences, only later becoming the salon in which the conclaves would be held. The Loggia dei Papi (Pope's Loggia) was originally known as the Loggia delle Benedizioni (of benedictions, or blessings) because the pope would stand there to bestow a blessing on the people gathered below in the Piazza San Lorenzo. The beautiful Sala Gulaterio Hall has a lovely coffered wood ceiling and frescoes. The halls are used for conferences and exhibits now. The Romanesque building has a facade with crenellations on the roofline; the beautiful loggia boasts seven arches, which are intertwined with lovely decorative stonework. But the real surprise is seen on the other side. Go behind the Palazzo and you'll see that it is much larger than it appears from the piazza. It sits on the edge over the Valley Faul, with massive buttresses holding it up onto the hillside.

Haven't visited yet? Have questions about Palazzo dei Papi? Ask them here!