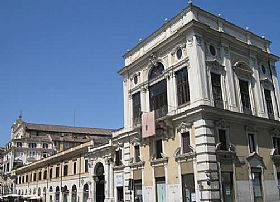 When the noble Colonna family decided to build a family seat in Rome, they did it in a big way. The imposing, sprawling palace occupies an entire city block of prime real estate near the Quirinale, the residence of the President. The palazzo is placed between Piazza Santi Apostoli and Via della Pilotta, and is so enormous that a foot bridge connects it to its gardens on the other side of Via della Pilotta. Built in the 1400s, it was given a Baroque facelift in the 1600s by Gian Lorenzo Bernini and Carlo Fontana.

The family is one of Rome's oldest and most important aristocratic clans. Originally from the ancient village of Colonna, in the Alban hills south-east of the city, they have counted cardinals, princes, popes and senators among their members. It was a Colonna pope, Martin V, that returned the papacy to Rome after its exile in Avignon. This imposing and impressive palace is one of the oldest and largest private residences in Rome. It has been the family seat for eight centuries, still owned and inhabited by descendant princes and princesses of the Colonna family.

The family amassed a massive collection of artwork through the centuries, which are on display in the grand Galleria Colonna. Open only one morning a week, it displays fine frescoes and masterpieces by the likes of Pinturicchio, Crracci, Reni, Tintoretto, Veronese, and more. The Principessa Isabella Apartment shouldn't be missed - its opulent salons are left in their royal splendor to give a glimpse of Old World noble life. The Sala Grande will look familiar to movie buffs - it was the scene of Audrey Hepburn's press conference, where she and Gregory Peck wistfully parted ways in Roman Holiday. The ceiling frescoes depict the patriarch Marcantonio's great naval victory at the Battle of Lepanto in 1577, visually highlighting the family's fame and influence.

This little-known museum and grand palace is worth visiting. It is open only on Saturdays from 9:00 am to 1:15 pm. There is a small bookshop and cafe.

Haven't visited yet? Have questions about Palazzo Colonna? Ask them here!