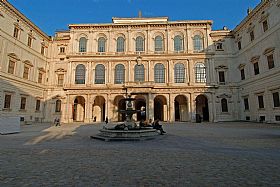 A massive palace in the heart of Rome, the powerful Barberini family couldn't do things on a small scale. The Palazzo Barberini started life as a small palazzo belonging to the Sforza family, but when Maffeo Barberini, who would later ascend to become Pope Urban VIII, acquired it and gifted it to his nephew, would take on epic proportions. Part urban palace-part country villa, the sprawling building is set in the midst of an enclosed garden.

The existing structure was added onto in a big way, with the original design coming from Moderno. On his death, the up-and-coming sculptor/architect Gian Lorenzo Bernini took over, with a hand from his rival, Borromini. The overall effect is Renaissance but with some Baroque flair added for good measure. The palace has a main building with two wings, with the facade bearing a classical look surrounding a courtyard. The entrance is through the arched portico, with arched windows on the upper floor mimicking their curved lines like glass arcades.

In the main hall are two staircases up to the piano nobile (main floor) - one is a large, square, classic design by Bernini, while the other is an elliptical, graceful spiral by Borromini, a chance for both to exhibit their skills and flair. The palazzo is now home to the prestigious National Gallery of Art (Galleria Nazionale d'Arte Antica), with masterpieces by Caravaggio, Raphael, Guido Reni, Lotto, Piepolo, Tintoretto and Gentileschi, among others. Several Bernini sculptures decorate various corners, but the highlight is the luminously frescoed Gran Salone, a gorgeously completed work by Pietro da Corona that glorifies Pope Urban VIII, the gifter of this villa, accompanied by a full contingent of Barberini bees, the heraldic symbol of the powerful clan. The bees, in fact, are found scattered all over the palace and grounds, so look for them on capitals, in the garden, on ironwork and carved into fountains.

Palazzo Barberini fronts the piazza of the same name, but the garden is enclosed and protected from the busy avenue. It's a classically-designed green space, and an "ancient" bridge links the palace with the garden. The Ponte Ruinante (ruined bridge) is, in fact, an artificial ruin, designed by Bernini at the behest of the owner who wanted to link his palace to the illustrious ancient history of his city. It has one arch 'broken' while another appears to be crumbling, like many of the Roman remains around the Forum and Tiber area of town.

Palazzo Barberini is one of the largest buildings in Italy, an impressive and imposing palace right in the heart of Rome.

The palace and the National Gallery of Art are open from 8:30 am to 7:00 pm daily. Closed Monday.

Haven't visited yet? Have questions about Palazzo Barberini? Ask them here!