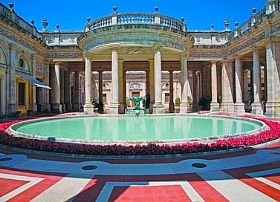 The Park of Panteraie is the sumptuous natural background of the luxury thermal spas in Montecatini Terme. The park does not belong to the spa complex and nonetheless is structured with lovely "life journeys" (guided gym tours of the park), medical walks, bar and restaurant. Montecatini is just ideal for all sport lovers: there is a big racecourse, where to attend international competitions; you can practice volley, golf and, above all, basketball. Shopping lovers will have their great chances to enjoy Montecatini, too thanks to the large range of shops, from craftsmen studios to luxury and glamour shops.

People take great benefits, in terms of liver and digestive system's healthiness, from the local thermal sources. The biggest spa is Tettuccio, whose source has become Montecatini's symbol, while the name comes from the canopy that covered the spa decades ago. The edifice was designed and realized during the kingdom of P. Leopoldo, to be the final "stop" of Vialone dei Bagni. It was enlarged at the beginning of the XX century, according to U. Giovannozzi's plan, in order to make it adapt to a city that was growing up quickly. It is an harmonious mixture of halls, laboratories, intermediate spaces decorated by great artists, like: Galileo Chini (ceiling), Basilio Cascella (ceramic panels), Giuseppe Moroni (Painting: la Sorgente) and Sirio Tofanari, who made the big fountains on the right. A bronze group representing two crocodiles while holding a marvellous granite shell is the main thermal font.

Leopoldine Thermal spa - built at the end of the eighteenth century, instead of the older "Bagno dei Merli" - was designed by Paoletti and so called in honour of the Grand Duke Leopoldo. The complex was notably enlarged and restored in 1926 for want of the great architect Ugo Giovannozzi. The façade shows soberly a monumental travertine, where it juts out a neoclassical pronaos that extends at the sides of two big wings, holding a large crater of almost 22 metres diameter.

Coming from Viale Verdi, on the left, Excelsior spa is the first one you will see. It has an airy portico with thin pillars and elegant capitals, arches with glazed medallions portraying illustrious men, somehow related to Montecatini. Built at the beginning of 1900, originally as municipal casino, meeting place and seat of cultural events. The structure was modified in 1915, adding a modern four-floors wing.

Le Tamerici, is a charming spa immersed into the park, whose name derives from the special trees that surrounded the original pool in 1843, and is now used as meeting place. The current complex - which was designed by Bernardini and Giusti – includes a farmhouse and a group of buildings studded double lancet windows, merlons, arches; the main body is decorated with a fascinating portal, rich in gres and ceramic decorations, by G. Chini. The garden displays the stunning Fontana delle Naiadi, by the sculptor Mario Rutelli. Four bronze groups which represented the Lake Nymph with the swan, the River Nymph riding a river monster, the Ocean Nymph, known as "Oceana", on a wild horse which symbolises the breakers, and the Underwater Nymph, lying on the back of a dragon. In the centre is the "Glauco" group, carved by the same Rutelli and added in 1912 substituting another sculpture, and representing the dominion of man over the forces of nature. This might be a miniature of the original one in Piazza Esedra, Rome.

Haven't visited yet? Have questions about Montecatini Spa? Ask them here!