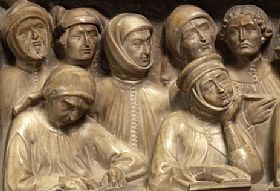 The Museo Civico Medievale is Bologna's museum dedicated to the Medieval era. It is housed in the Palazzo Ghisilardi-Fava, a building that dates to the 1400s, though Roman ruins have been found on the site and a tower from the 1200s, the Torre dei Conoscenti, was incorporated into the palace's construction. The palazzo itself is worth the admission charge of 5, as it contains frescoes by Annibale and Caracci, along with a bronze bust by Bernini and Giambologna's model for his Neptune sculpture, among other art treasures.

The museum itself contains crafts, artifacts, carvings, weaponry and clothing spanning the medieval era and is an interesting perspective to help appreciate the medieval atmosphere of Bologna.

Haven't visited yet? Have questions about Medieval Museum? Ask them here!

Ask our staff about self-catering homes in Emilia Romagna.