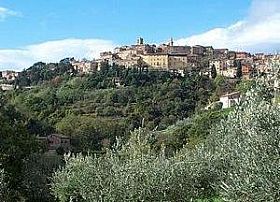 Magliano in Toscana may appear like a typical medieval hill town, but its roots go back to the ancient Etruscan city of Heba. The town is almost entirely circled by its protective walls, making it a lovely sight.

Etruscan Heba was an ancient city, and archeological finds confirm its existence. Then came the Romans. Its name didn't change, at least officially, until the Aldobrandeschi family took over the territory, dubbing it Magliano.

The town's walls were built in 1097, with further additions by the Republic of Siena in the 15th century, which constructed the western flank that included semi-circular bastions and crenellations, giving it a new architectural focus. The walls are, in fact, one of the most complete fortifications in the Maremma. There are three gateways to enter the old town, from the Middle Ages.

Wander around and enjoy the atmosphere of the historic center, with its stone buildings and old palazzi. Palazzo del Capitano was the seat of the rulers, its facade still decorated with the crests of the "captains" who ruled the city. It is also referred to as Palazzo dei Priori. It was build in the 1400s. The church of San Martino is a Romanesque gem from the 11th century, simple and spare but charming. There are churches and charm throughout the town, and the joy of discovery is better than a list of sights!

The area is lovely with its olive groves and grapevines. Magliano in Toscana is in the Morellino del Scansano wine zone, so a great vintage is served at every meal around here! The Mediterranean coast is only a half-hour away. The undiscovered towns of Maremma scatter the countryside, and natural parks are abundant in this area for outdoors lovers.

Haven't visited yet? Have questions about Magliano in Toscana? Ask them here! 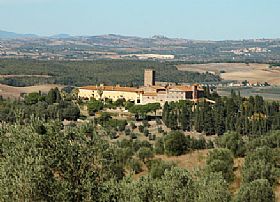 In the gentle hills of the Maremma is the castle and hamlet of Marsiliana, where princes still live.