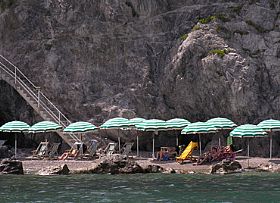 La Lucertola ("the lizard") is a small, nicely equipped beach connected to the Hotel La Lucertola in Marina di Vietri. It is reached by a long flight of steps down the side of the cliff. It is also accessible by following a path from the neighboring Due Fratelli Beach and wading a few meters in the shallow water. This cozy beach only has space for about twenty sunbathers, but fortunately isn't usually crowded.

It's pretty, with boulders rising up out of the water just off the shoreline. Like many other beaches in this area, La Lucertola was formed following a big flood in 1954, which occurred in Salerno and its surrounding area.

It is southeasterly facing so the sun shines until the early afternoon, when the above mountains shadow the beach.

Haven't visited yet? Have questions about Lucertola Beach? Ask them here!

Have a look at our holiday homes in Vietri sul Mare.