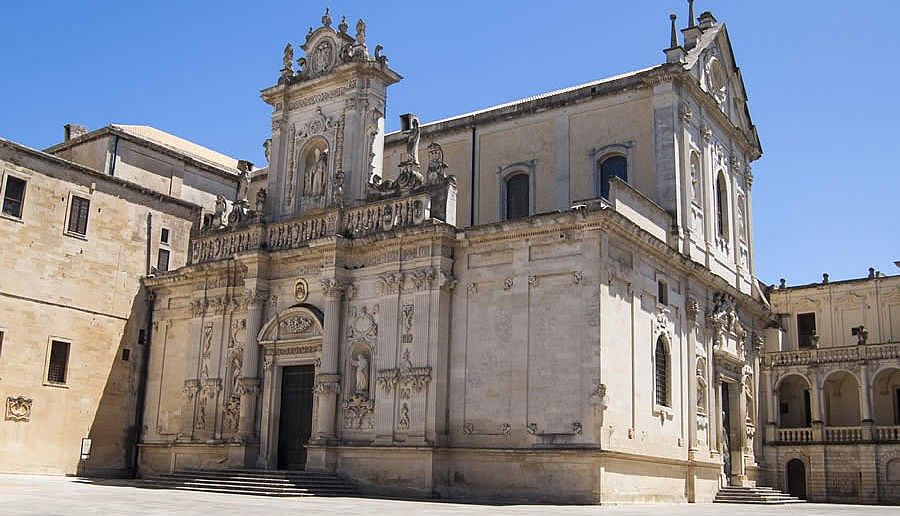 The cathedral of Lecce is a must-see, as much for its setting as the church itself. The Piazza del Duomo is one of Italy's most beautiful squares, a Baroque masterpiece that makes the space seem like a lovely cloister.

The piazza is closed, giving it an intimate feel and highlighting the artistry of the buildings that enclose it. The Episcopio Palace was the archbishop's regal residence and the Palazzo del Seminario now houses the museum of sacred art, which is worth visiting. Both are beautiful buildings, and the decorative carvings and adornments will enchant you.

Then there is the cathedral itself, dedicated to Maria as the "most holy Maria Ascended into heaven". The first cathedral was built here in 1230 in Romanesque style. In 1659 it was decided to rebuilt it in the new vogue Baroque, and Lecce's master architect Giuseppe Zimbalo was commissioned. He is the designer behind many of the city's gems. His only limitation was to maintain the original Romanesque footprint. The rest was redone in an ornate way, keeping with the city's new style, which now defines Lecce.

The tall bell tower was added later, built between 1661 and 1682. There is a fine view of the Adriatic from the summit and a nice overview of the city.

Haven't visited yet? Have questions about Lecce Cathedral? Ask them here!

Enjoy the comfort of a vacation home in Lecce.