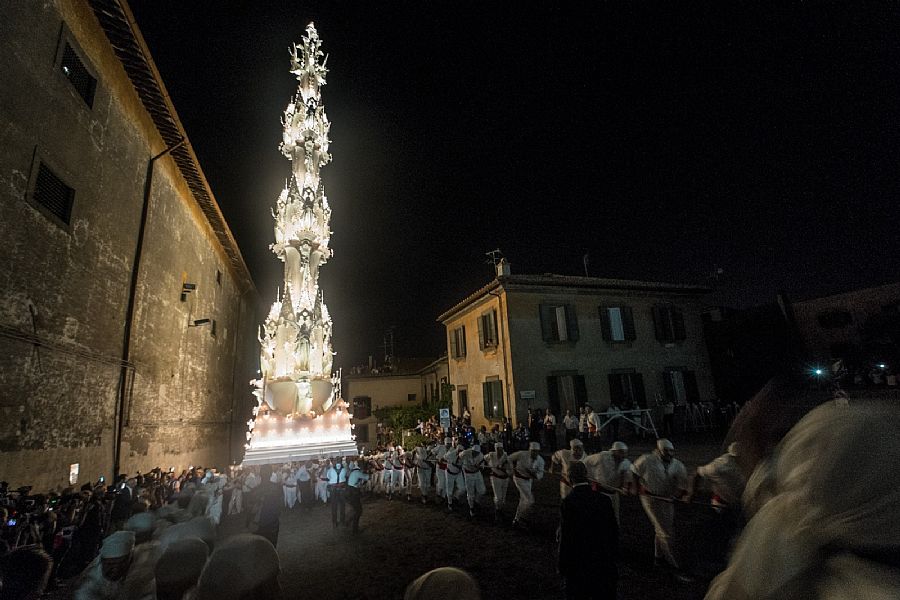 A towering spectacle of artistry and brute strength is the heart of the festa dedicated to Santa Rosa every September in Viterbo. The saint is honored with a soaring sculpture that reaches 30 meters high (98 feet). It is called "la macchina" (vehicle; machine) and is powered through the streets of the old town on the shoulders of 100 men!

This is not your "usual" religious procession. The "macchina" is intricate and imaginative, sculpted and built with great artistry, and then illuminated with lights and candles. It is a massive undertaking and is used for four years, then a new one is designed. The tradition as it is played out now goes back to the mid-1600s, though homage to Santa Rosa began in 1258 when the remains of the local saint were moved to the sanctuary built in her honor. It was done with a procession and pageantry, that included an illuminated statue of St. Rose. Through the years it grew and became grander, until the tradition of the "macchina" evolved.

Because of its size and various materials used, the macchina can weigh up to five tons! No wonder the carriers are called "facchini," which means "laborers" or "brutes". The men wear white shirts and pants with a red sash, and are also referred to as the Knights of Santa Rosa. They receive a special blessing before the event and conduct a special procession to solemnly visit the seven churches in the centro storico of Viterbo, then receive the final instructions for the grand procession.

The macchina is assembled and displayed in the Piazza San Sisto in the week preceding the event. The hundred-strong force become the "motor" and hoist the massive monument onto their shoulders and begin the kilometer-long procession that takes them to Piazza Fontana Grande, Piazza del Plebiscito, the Piazza delle Erbe, down Corso Italia and to Piazza Verdi, before resting the tower before the Sanctuary of Santa Rosa, where it will remain for a few days.

The festa brings visitors from around the world to see the unusual homage and is listed as a UNESCO cultural tradition. Models and exhibits of the macchina are housed in a museum.