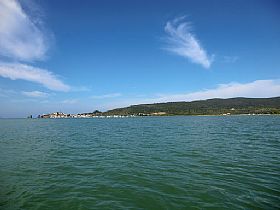 The Gulf of Talamone is a calm, natural oasis on the Tyrrhenian Sea. It is along the Tuscan Coast south of Grosseto. Starting at the promontory of Talamone on the north end, it sweeps along the Maremma coast to the rocky island of Monte Argentario to the south.

On the northern promontory is the Rocca Aldobrandesca, a seaside fortress built by the powerful and influential Aldobrancheschi family. Just beyond is the picturesque Port of Talamone, with colorful sailboats moored below the cliff, their masts reaching upward. There are a couple of lighthouses here, and the remains of a few defensive watch towers dating back to the Middle Ages, built to warn of potential Saracen attacks, are scattered about.

The Maremma coast is known for its natural beauty and is mostly undeveloped and free of buildings that obstruct the sea views. There are several nature parks; on the Gulf of Talamone is the Nature Reserve Laguna di Orbetello di Ponente. The coast is kept in its natural state and is home to many species of birds and wildlife.

Beyond and inland is a chain of high, tree-covered coastal hills. Hiking trails and horseback riding are found there.

The main draw is the Gulf's long stretches of undisturbed and clean sandy beaches that are relatively uncrowded even in the height of the summer. The beaches are backed by pine woods, while on the north and south ends of the gulf are rocky hills that plunge to the sea. Spiaggia di Bengodi is one of the most well-known. Water sports are popular, and while the coastline is mostly undeveloped, there are some seaside restaurants as well as services in the villages around the surrounding area.

Haven't visited yet? Have questions about Golfo di Talamone? Ask them here!