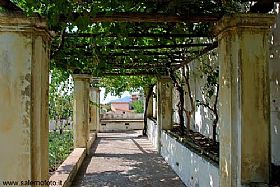 In the heart of Salerno lies a green oasis known as the Garden of Minerve. The thriving park is the oldest botanical garden in Europe, planted in the 13th century with medicinal herbs and plants for experimentation and therapeutic use by the famous Medical School of Salerno.

Instituted by Matteo Silvatico, a botanist and practitioner at the school, he used his family's influence, wealth, and land to start giardino. He was so well known that he was named as one of the doctors on the king's medical team. The Silvatico family was one of the most influential in the city. The gardens feature a unique water system composed of canals, ponds and fountains. There are terraces with orchards and rare flowers, as well.

Laid out over six terrace levels, the garden is a beauty and worth a visit. There are frescoes (recently restored) on the first level, and a tea room on the upper level, serving herbal teas made from the garden's plants.

Haven't visited yet? Have questions about Giardino della Minerva? Ask them here!

Have a look at our apartment rentals in Salerno.