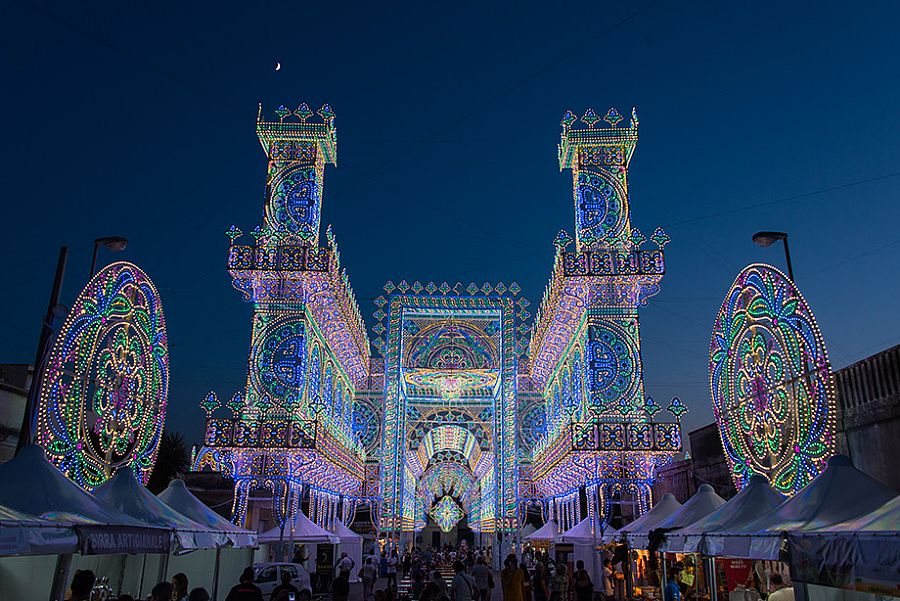 Scorrano is famous around Puglia; not for its history, though it's a long and storied one, but for its annual festival of lights.

The grand festival to celebrate Scorrano's patron saint, Santa Domenica, is more than a devotion, it's an obsession. One that lights up the town - more than literally.

Puglia has long been known for its celebratory attitude, and for its penchant for putting up flamboyant lights. But Scorrano takes the tradition to new heights with its festa, which is an illumination competition, as well. Several companies that specialize in luminarie are each assigned a street or piazza to design, and then they go to work creating massive and fanciful arbors, tunnels, and architectural elements out of lights. One year featured an illuminated Eiffel Tower. Another brought a cathedral of lights. It's a grandiose and splashy affair, and nother like you've ever seen before.

But the festivities don't stop there. Of course, the town celebrates its patron saint with a procession and other religious observances. And there is plenty of food and music. But the festival also lights up the sky as well as the streets, with a pyrotechnic competition, too. The best fireworks craftsmen in southern Italy blast out their brightest works.

Held every year from July 5-9, this is an amazing festival to behold.

Haven't visited yet? Have questions about Festival of Lights Scorrano? Ask them here!