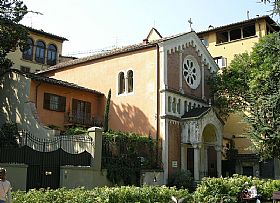 Just a stone's throw from the picturesque Ponte Vecchio in the Oltrarno quarter (meaning "the other side of the Arno") is the little Chiesa Luterana, built to serve the German-speaking Lutheran community of Florence. Established in 1901, the diminutive chapel was designed by architect Riccardo Mazzanti. It's a slender brick building iwth a rose window and white marble splashes of decoration on the exterior, while the simple interior is rather austere, in keeping with the traditional churches of northern Europe.

Wedged between apartment buildings and fronting a little piazza, it's near the Pitti Palace but is a far cry from the opulence of that palazzo. The little church ministered to the predominantly Swiss and German protestant immigrants who wanted a church service in their native language. It has since been "Italianized" but retains some services and events in the German language.

The some church community hosts weekly concerts every Wednesday evening from April through October, utilizing the organ and international artists for spiritual music and fellowship.

Haven't visited yet? Have questions about Evangelical Lutheran Church? Ask them here!

Ask our staff about self-catering homes in Florence.