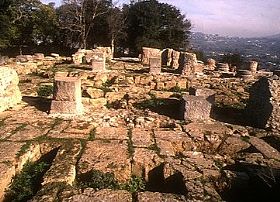 Anciently known as the "cradle of Greek civilization," Cuma is now an archaeological city. It's a wonderful place to to dive into the past and listen to the enticing voice of history, myth and culture. Coming from Pozzuoli, you will reach this enchanting land by crossing the Arco Felice Vecchio, seat of stunning oeuvres like Grotto of Cocceio, the Villa Vergiliana, the Amphitheatre, and Cuman Archaeological Park.

The latter could easily be considered the most mysterious place of the Phlegrean Fields, located on top of a charming natural fortress. You will experience a crescendo of emotions while admiring the Sybil's Cave (Antro della Sibilla): the Cumaean Sibyl was a prophetess of Apollo with a special connection to the Roman state, which kept a collection of her prophecies, bought from her by King Tarquinius Priscus, in the Capitolium. In Vergil's epic poem The Aeneid, Aeneas consults the Cumaean Sibyl, Deiphobe, for passage to the underworld.

This is a tuff grotto illuminated by six crevices that give a spectacular light effect, traditionally known as the place where the god Apollo gave off his prophecies. It is almost upsetting to find out that it actually is a tunnel used for military purposes... Continuing, you will reach a panoramic terrace where to observe the area once occupied by the Cuman harbour and where the ruins of the Temple of Apollo lie. According to the legend, this sanctuary with the beautiful entrances and golden roofs was built by the legendary Daedalus, that reached the area just flying from Crete with his complex wings.

Do not miss the Temple of Jupiter, located in one of the highest points of the park. Continuing through the verdant vegetation and marvellous views of the sea, you will discover various ruins of the building, while at the foot of the acropolis, defended by imposing boundary walls, extends the inhabited part of the city. The acropolis is actually a "city in the city", where sun beams seeping through the green trees contrast with the golden beaches nearby, a place where myth and magic have permeated in the ground.

The Arco Felice is drawn in the cut of Mount Grillo, in order to allow a more rapid access to the city of Cumae through the Domitiana, whose paving is still today perfectly kept and is integral part of the road corridor, and to allow the passage on the ridge of the hill. It stays before us with its huge dimensions, almost as a triumphal entrance to the legendary city, but instead of facing a severe show what we see is one of the most beautiful scenery of the world. According to the legend, who passes through the arch and kisses their lover will be happy forever.

Haven't visited yet? Have questions about Cumae? Ask them here!

Have a look at our vacation villas in Sorrento Coast.