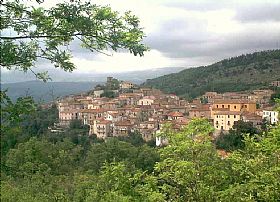 Situated on a ridge of Mounts Alburni excavated by the course of two side streams, Corleto Monforte has uncertain origin. According to the most probable thesis, the village should have been Lucan. To substantiate this hypothesis, there is the belief that tribes coming from the Lucania region, having ruled the nearby Greek settlements of "Montepruno" (Roscigno) and "Phasis" (Sant'Angelo a Fasanella), built Corleto Monforte in order to control them.

Surely we know, however, that Corleto Monforte was built on the high rocky ridge to dominate the valley of Fasanella.

The center was originally called "Coryletum" to indicate the place where the trees were full of nuts. More recently, Corleto Monforte has been owned by several landowners and the many forts still admirable here were built at that time. In this period, during the revolt of the barons against Frederick II in 1246, the troops of the Emperor, after conquering Capaccio, at the end of the rebellion, ravaged all the lands of those who attended the conspiracy and burned their castles to prevent any possible future attack. It is interesting that after twenty days of siege, the inhabitants of Corleto, to demonstrate to the opponent to be well supplied with provisions and able therefore to resist for long, instead of throwing stones and other weapons against the assailants, they threw cheese. This led the imperial captain to lift the siege and, in this way, Corleto was able to limit the damage and the houses were not touched at all, also thanks to the mighty fortifications.

Among the most important archaeological sites that you can visit in the area of Corleto Monforte, we must mention the "Piano del Bue" (Plan of the Ox). The site is reachable by the highway S.S. for San Rufo and is at about 6 Km from the village. These are the remains of an urban settlement of Roman-Lucan origin. The site is a private property, but you can visit it for free.

Another archaeological site worthy of being reported is the "Timpa degli Antichi". It is, in this case, the remains of rural settlements, located on the border with Sacco and reachable only by foot. The site is free to access.

Far more numerous are, however, that the architectural goods that Corleto Monforte guards jealously. The main one is the Church of St Barbara, originally a temple dedicated to the goddess Diana, goddess of hunting, as Corleto abounded in woods and game. The original nucleous was not as large as the current church. It probably began from the current balustrade and ended at the penultimate arch. As soon as Christianity began to spread in the area, the temple was dedicated to the Virgin and renamed as "St Maria dell'Elice" because there was a majestic helix in front of the current courtyard, which was demolished in 1882 because it was unsafe. The Church was the first parish of Corleto, together with the church of St Teodoro. Later on, around the year 1700, it was dedicated to St Barbara because, at that time, the cult of saint became widespread in the area. The statue was purchased in Naples June 24, 1720.

Among the other architectural sites, we remind the Church of St Giovanni. This temple was built in 1568. It is located on the upper part of the village and boasts a beautiful bell tower. The statue of St John the Baptist was purchased in Naples in December 1719 and brought to Corleto with a mule.

The traditions of the people of Corleto Monforte relive and renew themselves in many folkloric and religious manifestations. Among the various events, don't miss the typical Caciocavallo cheese festival which takes place in August 14 to promote and enhance a typical local resource.

Haven't visited yet? Have questions about Corleto Monforte? Ask them here! 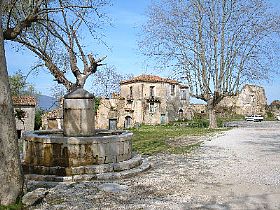 Roscigno Vecchia is an intriguing ghost town hidden in the Cilento National Park. 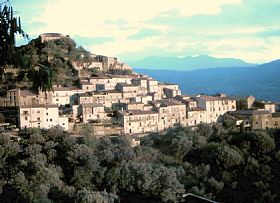 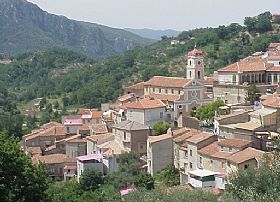