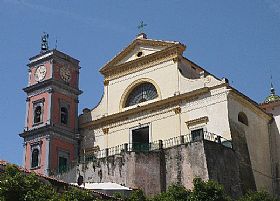 The collegiate church of Santa Maria a Mare, in the pretty town of Maiori, is situated in the middle part of town, Maioiri itself staggered on the side of Mount Torina. Tradition holds that a statue of Mary was found on the beach of Maiori in 1204, and the church owes its founding and its name to this lucky find. The church was built on the remains of an old fortress, the Rocca di Sant'Angelo, that was destroyed by an incursion of Pisans in 1137. Santa Maria a Mare rests on a rock and forms a focal point for the town of Maiori. The grand dome is distinctively covered with hand-painted maiolica tiles.

Built in the 1200s, it has undergone several alterations through the years, including the addition of an eighteenth-century bell tower. The famous statue holds a place of honor inside. It has an airy interior marked by a coffered ceiling and a vaulted nave. The crypt contains the relics of St. Clement, a Roman martyr. An impressive organ occupies the choir loft.

The church also houses the Museo d'Arte Sacra, the Museum of Sacred Art, which preserves statuary, relief sculptures and other religious artifacts in the crypt area of the church.

The festival in honor of Santa Maria a Mare is an annual event that draws devoted fans from all over the Amalfi Coast, who participate in the solemn procession that carries the statue of Mary, dressed in an elaborately embroidered garment, though the streets of Maiori. After the religious observances, the town hosts a party with concerts, fireworks and food that lasts until dawn.

Haven't visited yet? Have questions about Collegiate Church of St Maria a Mare? Ask them here!