Church of the Crucifix 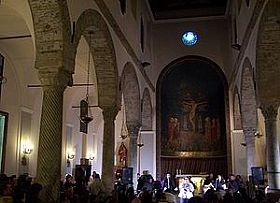 In the narrow streets and compact quarter of Salerno's historic center is the church of the Most Holy Crucifix. Referred to in Italian as the Santissimo Crocifisso, its modern facade hides an ancient interior. The church was built in the 1200s as part of the monastic complex of San Benedetto.

The church was originally called Santa Maria della Pietà di Portanova but the name was changed to reflect the possession of a prized painted wood crucifix created in the 1200s. The important relic is housed in the Diocesan Museum.

The nave is outlined with a series of columns, each capped with a differing style of capitals, and surmounted by stone arches.

The crypt is rich in fresco fragments from the 1200s and should definitely be visited. One scene is outlined with a geometric pattern reminiscent of illuminated manuscripts dating from the Swabian-Manfredi period of Frederick II. The crucified Christ is depicted with eyes closed, unusually for the time when Byzantine tradition always depicted Jesus on the cross alive with eyes open.

Haven't visited yet? Have questions about Church of the Crucifix? Ask them here!

Rent a holiday house in Salerno and travel like a local.