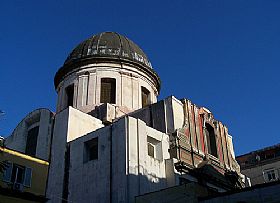 The Church of Santa Maria Maggiore in Pietrasanta is considered a holy site. It was originally constructed in the 6th century over the remains of a temple dedicated to the Roman goddess, Diana. The basilica was renovated in the 1600s, though, by Neapolitan architect, Cosimo Fanzago, who bestowed on Naples a local variety of Baroque. He used richly colored marble and vibrant maijolica tiles to enrich the structure. The severe facade hides a bright and airy interior crowned with a cupola.

The church is one of Naples oldest, located in the most ancient part of the city. It was also the first church in the area to be dedicated to the Virgin Mary. It is named "pietrasanta" for the holy stone incised with a cross; it is believed that kissing this stone gives absolution to the faithful penitent. The crypt bears traces of the original ancient church, along with fragments of Roman era mosaics. There was a recent discovery below the church of Templar symbols, indicating it may have been a secret hall for the renowned knights.

The accompanying bell tower is one of Naple's oldest towers and was largely constructed using materials from Roman ruins, as evidenced in the Latin inscriptions in the stone.

Haven't visited yet? Have questions about Church of St Maria Maggiore alla Pietrasanta? Ask them here!

Ask our staff about self-catering homes in Naples.