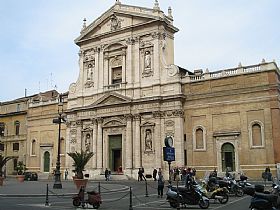 The beautiful Baroque church of Santa Susanna is the American church in Rome. It is a monument to art history, but is also an active Catholic community that is a center for American pilgrims coming to Rome. The sisters offer hospitality and Papal audience tickets, along with general information to incoming travelers interested in Christian sights in the center of Catholicism.

The ground-breaking Baroque facade was designed by Carlo Maderno, his first commission in Rome. Previously he had worked under the architect, Domenico Fontana. Completed in 1603, it created a grander sense of height and depth than it actually possesses, yet is completely proportional. The pope was so impressed by the work that he named Maderno one of the principle architects for St. Peter's Basilica. He created the nave and facade of that great monument.

Which the facade and decorations are Baroque, the church foundations are ancient. There has been church on this site for 1700 years! The first was a house church (domus ecclesia) during the Roman era, opened to faithful followers by the home's owner, Gabinus. He had a daughter named Susanna. Both of them were martyred here. In 330 AD, under Emperor Constantine, the first chapel was established to entomb the two martyrs. Subsequent buildings and additions took place over time to achieve the current place of worship you see today.

Santa Susanna is unique in that it is the only church in Rome completely covered in frescoes. The interior is vibrant and a veritable feast for the eyes! A must-see for sure!

The sisters of Santa Susanna offer a reservation service for those wanting tickets for the weekly Papal Audience held every Wednesday at 10:30 am. Tickets must be reserved in advance, and picked up on the Tuesday before between 5:00 pm -6:45 pm. See this webpage for details and the reservation form.

Haven't visited yet? Have questions about Church of Santa Susanna? Ask them here!