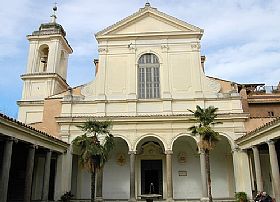 Take a trip through Rome's architectural history in just one church! You can see how the city was built in layers through the centuries, with one building nested on top of a preceding one with a visit to the Basilica of San Clemente. Here the current 12th century church was erected over a series of other structures, all visible and visitable with an admission ticket.

The lowest and oldest layer is a first century BC Roman temple dedicated to Mithras, a mystical cult that was imported to Rome from Persia. On top of that is a first century AD building that was the villa of a Roman nobleman. Then came the 4th century church that was first built in honor of St. Clement, the fourth pope. When that structure was deemed unstable, it was leveled and the current building was constructed over it in the 1100s. Each layer contained a courtyard, including the colonnaded one that is still present today.

The self-guided tour descends through these eras and excavations for a fascinating glimpse at the way the Eternal City was built and altered over time.

Haven't visited yet? Have questions about Church of San Clemente? Ask them here!