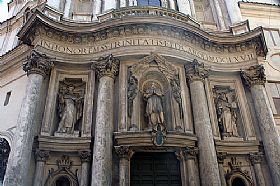 The master of illusion Francesco Borromini created a Baroque jewel with the church of San Carlo alle Quattro Fontane. Located near the Quirinale Palace, the masterful architect was given the task of squeezing a church into the asymmetrical space at a popular crossroads. It is often referred to as San Carlino, a diminutive, because of its miniscule size. It was commissioned by the Trinitarians, a Spanish order of monks known for their poverty who had been dedicated to freeing Christians captured by the Moors. They had an existing monastery that Borromini had to work around, as well as one of the four fountains for which the street is named, placed at each corner of the intersection.

The space restrictions didn't impede Borromini's imagination. He employed classic elements on the facade like columns, capitals and window orders but set them in undulating curves, which brought High Baroque style into its own. The facade of the side of the church is spare and classical, blending with the adjacent building. The "cut off" corner maintained the existent fountain, while he cleverly set the bell tower above it, on the building's corner. The dome doesn't have a drum; instead the lantern is given curved bays to appear larger and has a stepped cupola on top.

Inside, the come is a trick of illusion to appear larger - it has scalloped bays to mimic a drum then gives way to an elliptical shape with geometric patterned coffers which makes it look grander. Hidden windows and the lantern allow light to play with the illusion, as well. The entire church - both interior and exterior - is a curvilinear work based on a complex geometric plan, which became Borromini's trademark. He took odd-shaped and small sites and built grand designs to fit them.

The cloister is a contrast - it is rather spare, intimate and peaceful. A portrait of the architect hangs in the church off the sacristy.

Thanks to Ocad 123 for use of the photo

Haven't visited yet? Have questions about Church of San Carlo alle Quattro Fontane? Ask them here!