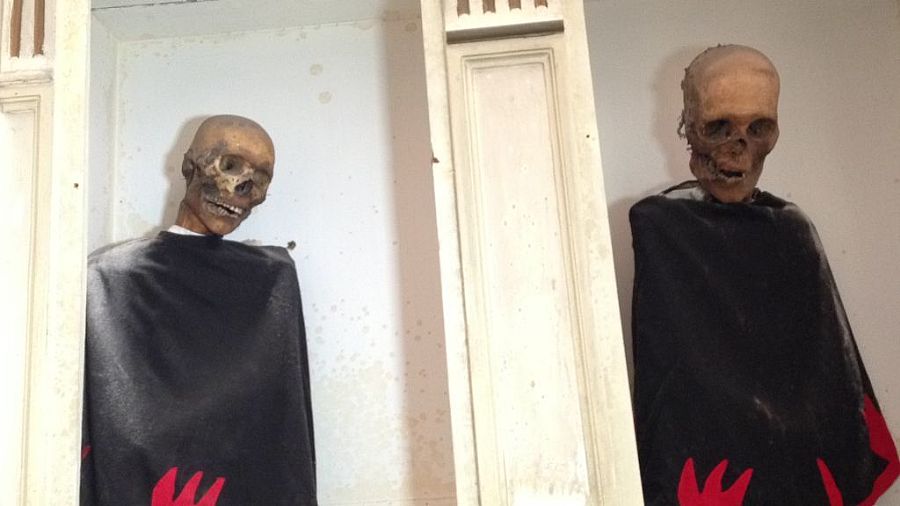 The church of Purgatory, officially known as the Chiesa di Santa Maria del Suffraggio, is a complete contrast to the next-door cathedral. The doors indicate the theme of the place: skeletons. Dedicated to the Madonna of Suffragio (intercession) it was one of many churches of this period that highlighted the theme of purgatory.

This one has an interesting backstory, though. The Confraternity of the Intercession for the Souls of Purgatory (a catholic brotherhood organization) had formed and had offices in the cathedral. On September 20, 1686, the cathedral's bell tower collapsed and fell on surrounding houses, killing 40 people. The confraternity bought the land and set about to build a church in memory of those who perished. Construction was started in 1687 and completed in 1700. The confraternity took on the decoration of the church as well, bringing in the painting of the Madonna del Suffragio from Napoli, by artist Paolo de Matteis, to place behind the altar. But despite this and other works, the main feature isn't the art but the bones.

The church has a macabre, some may say creepy, collection of skull and cross-bones motifs carved and engraved all over it, a common feature in "purgatory churches". But there is also a motley crew of mummies, cloaked in white robes that are edged in crimson. The odd fascination with skeletons lends an air of weird intrigue that draws visitors to see it for themselves.

Haven't visited yet? Have questions about Church of Purgatory Madonna del Suffragio? Ask them here!

Enjoy the comfort of a vacation home in Monopoli.