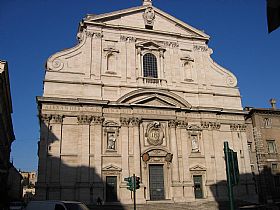 The Church of Jesus (Chiesa del Gesù) in Rome, is a beautiful blend of Renaissance and Baroque styles,and the symbol of the Jesuit order. The church is a triumph of Baroque and a temple befitting the status as "mother church" of the newly formed Jesuit order. Established by St. Ignatius of Loyola in 1540, the church was spearheaded by two Farnese clerics, Pope Paul III and his "nephew" (actually grandson) Cardinal Farnese, who funded it. The saint died before the church was built, but is laid to rest here.

The Jesuit order was created as the Society of Jesus, in the counter-reformation to standardize training for priests, promulgate religious education and wipe out church corruption. Their first church needed to grand and central, in the heart of Rome. It is festooned with opulent but chaste decorations. The facade and dome were designed by Giacomo della Porta, while the incredible frescoes were completed by Genovese artist Baciccia. The dome and paintings are triumphant, even extending over the boundaries of the "frame" to create an illusion of three-dimensional figures. It is a church to see!

The chapel of St. Ignatius has a lavish artist by Jesuit artist Andrea Pozzo, who also designed a unique mechanical device that plays music at 3:30 PM while lowering the painting to reveal a statue of the saint. There is an altar dedicated to St. Francis Xavier, one of the monks and co-founders of the order, by Pietro da Cortona in multi-colored marble.

The Church of Gesu', also known as Il Gesu', is in the center of Rome on Piazza del Gesu. It is still the home church of the Jesuits.

Haven't visited yet? Have questions about Church of Gesù? Ask them here!