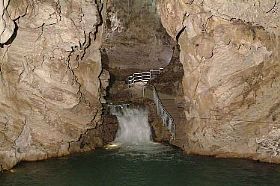 The caves of Pertosa, also officially known as the Grotte dell'Angelo (Caves of the Angel), are set in an attractive natural amphitheatre, in the green landscape of the Alburni mountain of the Cilento National Park. The caves are located between the villages of Auletta and Pertosa, 70 km (about 43 miles) from Salerno.

The Angel Caves of Pertosa unfold for about 2500 meters across tunnels and immense cavern chambers; they are punctuated by the beautiful stalactite and stalagmite formations. The caverns are truly impressive, and they are unique in Italy.

To visit the caves one must cross an underground river. A boat is expertly guided into the depths of the earth for some 100 meters, in a silence which is broken only by the sound of water and exclamations of surprise. After a few minutes the boat berths and the enchantment begins. A wonderful waterfall created by the Black River echoes distant times, stalactites and drapes of candid alabaster hang from the vaults of the caverns, stalagmites of strange shapes capture incredulous gazes, as one walks through tunnels and arabesque corridors lit by the subtle play of light into vast salons each of which has a name, and one meets with the incredible concretion which nature has created throughout millions of years.

Recent research dates the origin of the cave to about 34 million years ago. Numerous traces show that they were lived in up until the stone age; the Greeks and Romans assigned the cave as a seat of cult and finally the Christians consecrated the caves to St. Michael Archangel.

The Grotte dell'Angelo are easy to reach taking the A3 highway Salerno-Reggio Calabria exiting at Petina, then following the signs. At about 200 m from the entrance to the caves there is a large car park and, without ruining the natural beauty of the surrounding landscape, there are also restaurants where one can taste the delicious local cuisine.

Haven't visited yet? Have questions about Caves of Pertosa? Ask them here!